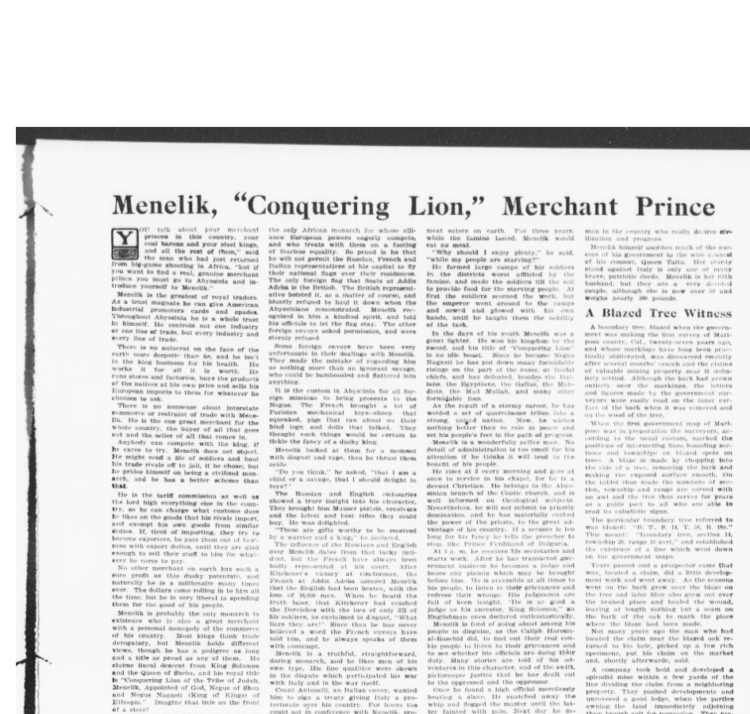 You talk about your merhant princes in this country, your  coal barons and all the rest of them,” said the man who had just returned from big-game shooting In Africa, “but if you want to find a real, genuine merchant prince you must go to Abyssinia and in- troduce yourself to Menelik.” Menelik is the greatest or royal traders. As a trust magnate he can give American Industrial promoters cards and spades. Throughout Abyssinia he is a whole trust In himself. He controls not one industry or one line of trade, but every industry and every line of trade.

There is no autocrat on the face of the earth more despot – than he, and he isn’t In the king business for his health He works it for all It Is worth. He runs stores and factories, buys the products of the natives at his own price and sells his European imports to them for whatever he chooses to ask.

There is no nonsense about Interstate commerce or restraint of trade with Menelik. He is the one great merchant for the Whole country, the buyer of ail that goes cut and the seller of all that comes In. Anybody can compete with the king, if lie cares to try. Menelik does not object. He might send a file of soldiers and haul Ms trade rivals off to Jail, if he chose; but he prides himself on being a civilised monarch, and he has a better scheme than that.

Ho is the turlff commission as well as the lord high everything else In the country, so he can charge what customs dues lie likes on the goods that his rivals Import, and exempt his own goods from similar duties. If, tired of Importing, they try to lieeome exporters, he puts them out of business with export duties, until they lire glad enough to sell their stuff to him for whatever he cares to pay.

No other merchant on earth has such a sure profit as this dusky potentate, and naturally he is a millionaire many times over. The dollars come rolling In to him all the time, but he is very’ liberal in spending them for tiie good of his people.

Menelik is probably the only monarch In existence who Is also a great merchant with a personal monopoly of the commerce of his country. Most kings think trade derogatory, but Menelik holds different Views, though he has a pedigree as long and a title us proud as any of them. Ha claims lineal descent from King Solomon and the Queen of Sheba, und his royal title Is “Conquering Uon of the Tribe of Judah, Menelik, Appointed of God, Negus of Shon and Negus Nagastl King of Kings) of Ethiopia.” Imagine that title on the front of u store!

But though Menelik has such a giant’s power In matters of commerce, as In everything else In his country, he does not use It os a . When he buys goods from his people, or sells to them, he fixes fairly reasonable prices. He has sense enough not to kill the goose that lays the golden eggs. He knows that If he paid unreasonably low prices the people would produce little or nothing for export, and that if he charged absurdly high prices the consuming powers of the population would approach the vanishing point in regard to foreign imports.

It seems strange that a king who won his despotic, power as nn Invincible warrior should use it as a shrewd merchant and It is the stranger because he is a man who cares nothing for wealth or luxury. Ha lives as simply as he did In the days of his youth, when ho owned nothing save his horse nnd his spear. Hut Menelik is a fur-feein- many-side- d man.

After the Italian invasion of Ethiopia you must never call It Abyssinia in the country, for the Abyssinians loathe the name most of the natives succumbed to a severe attack, of “swelled head.” They had crushed the Italians and they thought they could easily do the same to any other Invaders, white, black or brown, at any time.

Hut Menelik did not catch the prevailing epidemic. He knew something of the pi.wer of the while nations, und also their hind iiungcr. He saw the clow, resistless advance of the Knglish through the Soudan, and the partition of many African kingdoms among the European iwwors.