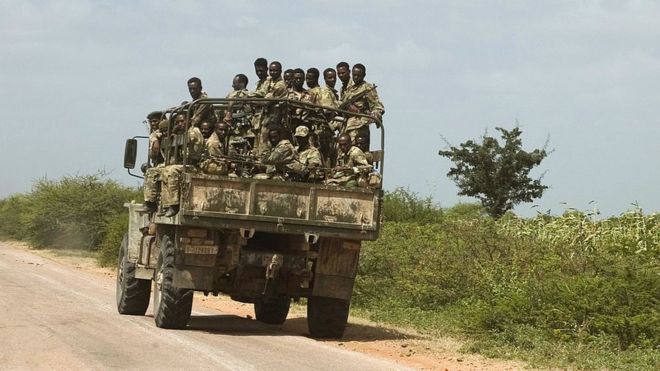 Ethiopian forces had destroyed the base before abandoning the area, a radio station run by al-Shabab said.

The troops withdrew after the base came under artillery fire, a Somali security official said.

Ethiopian has not commented on the withdrawal.

In recent weeks it had also withdrawn its forces from the nearby town of Moqokori, AFP news agency reports.

In June, al-Shabab, which is linked to al-Qaeda, said it had killed 60 Ethiopian soldiers in an attack on a base in Halgan town, also in central Somalia.

The withdrawal from el-Ali has made a large and strategic area vulnerable to occupation by the militants, reports the BBC’s Ibrahim Aden from the capital, Mogadishu.

Some Ethiopian soldiers are in Somalia as part of a 22,000-strong African Union (AU) force while others are there as a result of a bilateral deal with the weak Somali government.

The Ethiopian soldiers in the AU mission are responsible for securing Bay, Bakool, and Gedo regions but are also present in Hiran, which borders Ethiopia.

Somali security official Abdirisak Moalim Ahmed confirmed to AFP news agency that al-Shabab had occupied el-Ali, and the Ethiopian troops had headed for the regional capital, Beledweyne, about 70km (43 miles) away.

Most traders had fled the village following its seizure by al-Shabab, resident Osman Adan told AFP.

Ethiopia has a long and porous border with Somalia, and has been anxious to stop the infiltration of Islamist militancy into its territory.

Earlier this week, a state of emergency was declared in Ethiopia itself to quell the worst unrest in the country since the government took power in 1991.

Opposition groups in Ethiopia are demanding more political and economic rights, accusing the government of being repressive.

The government has blamed the unrest on “terrorists”, accusing them of trying to break up the East African state of more than 86 million people.