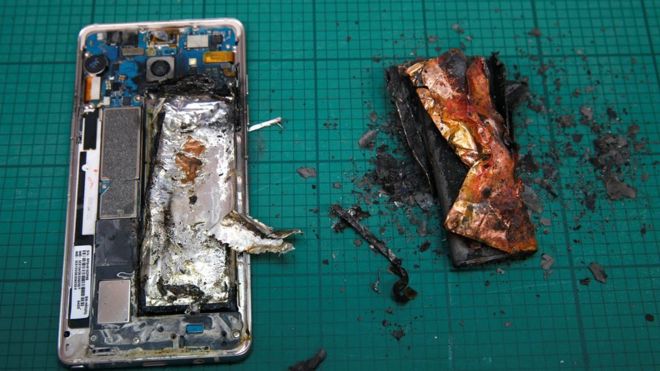 Samsung Company ordered to turn off and not to use Samsung Note 7 Smartphone.

Samsung has urged all owners of its Galaxy Note7 smartphones to power them down and stop using them.

Samsung said it had asked its global partners “to stop sales and exchanges of Galaxy Note7” while further investigations took place.

Those who have the device should seek a refund or exchange for a different smartphone, Samsung added.

In a statement the firm said consumers’ safety remained its top priority.

This is the second time in two months the Note7 has been pulled off shelves.

It had already recalled 2.5 million Note7s due to faulty batteries, but the latest reports of damage on the replacement devices raised fresh doubts about the firm’s quality control abilities.

Samsung has not yet commented on the cause of the problem in the replacement devices.

Consumer safety officials in the US said they were investigating five incidents of fire or overheating since the company announced a recall last month.

Major airlines have also introduced bans on passengers using the smartphone on flights, after smoke from a replacement device forced the evacuation of a passenger plane in the US last week.

The South Korean company had promised its new Note7 with a green battery icon was safe.

But the new fire concerns have prompted questions about whether the battery was the only problem in the smartphone, as Samsung had initially said.

The company ordered the suspension of sales on the recommendation of South Korean safety officials, who said they suspected the new defect may not be related to its batteries.

“We would have not taken this measure if it had looked like the problems could be easily resolved,” said Oh Yu-cheon, a senior official at the Korean Agency for Technology and Standards.

He said it would take more time than the agency originally thought to figure out what was wrong.