Ethiopia in the eyes of a foreigner: An Interesting story!

Living in a country that was never a colony is actually pretty rare—unless you’re in Europe, of course. As an ex-anthropologist and travel addict, I’ve had the opportunity to visit countries across five continents, but when I moved to Ethiopia in 2014, I quickly realized I was in a unique place.

Depending on how you define it, the only countries that were never colonies are Liberia, Ethiopia, Japan, Thailand, Bhutan, Iran, Nepal, Tonga, China, and possibly North Korea, South Korea and Mongolia. Some historians nitpick over this list. Ethiopia, for example, was occupied by the Italians from 1936 to 1941, until they were kicked out. They left behind pizza and pasta (which could never be a bad thing). But if these historians took the time to visit Ethiopia (or the other countries on the list), they would realize how obvious it was that they were never really colonized.

© Courtney Danyel : From my own experience, here are eight telltale signs that told me the country I was living in was never a colony:

The official language of Ethiopia is Amharic. But despite living in the country for 16 months, I can barely string a sentence together. That’s because I live in the southern region, in the Sidama zone. In the city, about half the people speak Sidamic. Drive five minutes in almost any direction, and 100% of the people speak Sidamic—and Sidamic only.

So I’m learning tons of Sidamic. But if I drive northeast  for 30 minutes, I’ll be in the Oromo zone, where there’s a completely different language and culture to learn about. Then there’s the Ethio-Somali, Tigray, Gurage, Welayta, Hadiya and Afar. In fact, there are about 88 indigenous languages spoken in this country daily.

This may sound like a strange thing to say, but anyone who has visited a former colony will know what I’m talking about. In most of these countries, there is still a certain amount of deference to white foreigners, and anyone who tells you differently is kidding themselves.

When I was doing fieldwork in Central African Republic, for example, I met an older woman who didn’t want to do an interview with me. I was a little surprised, because she was the first person ever to refuse.

I asked my translator, “Why doesn’t she want to do the interview?”

He promptly replied: “She fears.”

“She remembers the French.”

CAR was under French colonization until 1960. I’m not French, but to this woman, I may as well have been.

And old women weren’t the only people perturbed by my presence. Small children would sometimes scream upon seeing me approach, because the only time they’ve ever seen a white person is when they’re about to get an injection.

I expected some similar reactions in Ethiopia, but never got them. The local doctors are Ethiopian, so kids don’t think I’m there to jab them with needles.

Sure, I’m a novelty, but never one that needs to be feared or catered to. When I go to the clinic, I sit in line like everyone else. And if someone wants to be nice to me, I’m certain it’s not because of some culturally ingrained holdover from colonial times. They’re nice to me because I’m a guest, and hospitality is a big part of their culture.

3. If you want to be understood in English, you better speak the dialect.

Most former colonies had the language of their colonizers thrust upon them. Ethiopians do call the town center “piazza” and freezer pops are called “gellati,” but other than that, you don’t hear a lick of Italian on the streets.

Still, Ethiopian educators understand the importance of English as a global language, which is why they start teaching it in the 1st grade. Most of the 26% of Ethiopians who manage to finish secondary school speak it quite well. But what I quickly discovered is that if I wanted to communicate with someone in English, and be understood, I had to learn Ethiopian English.

Unlike a lot of former colonies, English is almost always taught to Ethiopians by Ethiopians. And in my opinion, it’s already starting to evolve into a sort of pidgin language, which is why every morning I find myself translating BBC News from English into English for my partner.

A few beginner tips for the language:

4. No matter what you say, you’re from Europe.

I’m from the U.S., and have been making plans to take a trip back home to visit. All my friends know that it’s been a while, so they’re often saying, “I hope you have a great trip back to Europe.”

For a while there, I thought that literally everyone I knew had no idea where I was from. Until I called someone out on it: “You know, I’m not from Europe, I’m from the U.S. I’m going back to the U.S.” My friend dismissed the comment with his hand and said: “That’s all Europe!”

I’ve since discussed it with other people, and their sentiments are the same. Even the news media refer to “ferengoch” when discussing Western markets, which literally translates to: “Those white people.”

In my early days of living in Ethiopia, a kid yelled at me: “Hey, Buddha Buddha China Town!”

It would not be the last time, either. People on the street call me “China” almost every single day.

I’ve been to a lot of places, but Ethiopia is the first one where I’ve been confused for a Chinese person.

But you kind of can’t blame them. There are a lot of Chinese here. Way more than “ferengis” anyway. The two countries are doing a lot of business together, and since Ethiopia has never been colonized, it’s much more likely for the first light-skinned person someone sees to be from Asia.

I just laugh it off, and console myself by thinking that I probably don’t get called “China” nearly as much as the many Koreans and Japanese who visit the country.

6. Nobody cares about your holidays.

Any expat can tell you that missing holidays with your family can be one of the hardest parts of living abroad. Luckily for Christmas fans, you can find at least pockets of Christians in almost every part of the world who have some understanding of the importance of the day for you.

Ethiopia is about 63% Christian, but that didn’t stop the past two Christmases from being the toughest of my life.

You see, Ethiopia has its own calendar (like China, another non-colony), and their Christmas is two weeks later than Western Christmas. So on Dec. 25, 2015, I was sitting around doing nothing while everyone else in town went about their business. No one knew it was a holiday for me. Of course I had no work to do—all my clients in the West gave me time off. Then, about three days after Christmas, the shops started putting out Christmas decorations for sale. The hotel near my house made a gingerbread house and brought out the blow-up Santa Claus. I found the Christmas cheer!

I was at least able to commiserate about the holiday with my Mom via Skype. She was in China, where Christmas is also not a very big deal. She said she was looking forward to Chinese New Year.

Luckily, it’s easy to forget about all that by getting involved in the local holidays. There are many. I might not have been able to celebrate the beginning of 2016 on Jan. 1 (Ethiopian New Year is Sep. 11), but I did have a blast with both the national and local new year’s celebrations (also weeks apart from each other).

7. There’s only one rock band.

I never noticed how much Western music influenced the rest of the world’s musical tastes until I moved here. Throughout Africa and South America, rock, alternative, hip hop and rap are standard genres.

But here, there’s only one rock band (at least that I know of). They’re called “Jano Band,” and their stuff is pretty good, but nowhere near as interesting as the majority of Ethiopian music. Ethiopian music is diverse, like the people, and has a unique sound that you can’t find anywhere else. Sure, popular Western styles are starting to seep in, but I would say that 95% of the country’s music is diatonic, and often features livestock in the music videos. 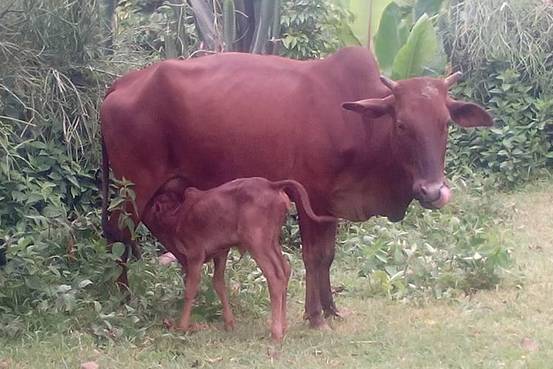 Many Ethiopians love their cows as much as Westerners love their dogs. They even let them sleep in the house (though not on the bed). PHOTO: Israel Irassa

Honestly, I hope it stays that way. Learning about the diversity of music in a country that has never been colonized makes me wonder how much stronger local musical styles might have been in other places that were.

8. No one understands why you’re in such a hurry.

Africa in general tends to be more laid back than the Western world, but one result of the unfortunate colonization of places like Kenya and Ghana is that they have a leg up when it comes to catering to Western expectations.

I think that’s why it’s completely acceptable here for a waiter to hold me hostage at one of the nicest hotels in town because she can’t print me a receipt … This actually happened: The power was out, and she couldn’t issue me a receipt for my meal, so I couldn’t pay. I asked her if I could pay without a receipt, and she said no, for tax reasons. I had someone waiting for me, so I tried to hand her more than enough money and head down the stairs. Very apologetically, she physically blocked me from leaving, and said, “Please, please wait.”

I knew she was worried about getting in trouble, so I sat back down. But after about 20 minutes, I left the money on the table and ran out when she wasn’t looking. 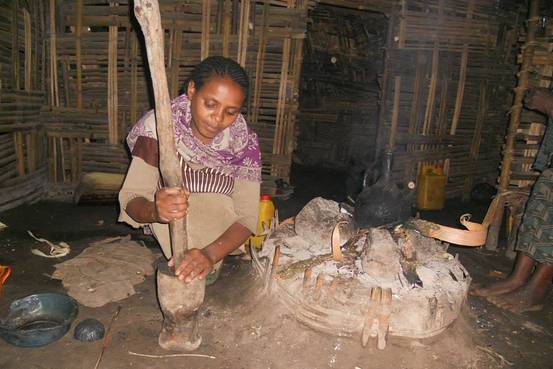 A kind woman welcomed me into her simple home so she could roast, pound and brew coffee for me the Ethiopian way. PHOTO: Courtney Danyel

In Ethiopia, people always have free time, even when they really don’t. I didn’t understand it for a long time, but there is a serious cultural obligation to stand on the street and greet everyone at length. I used to get angry at my partner when I’d send him across the street to buy bread, a task that takes about two minutes. He would come back after an hour, shrug, and say, “I was greeting people.”

Perhaps many people wouldn’t notice this stuff, but I think that nothing better demonstrates the long-term impacts of Western colonization than spending some time in a country that never experienced it.

Still, globalization continues to spread, and I can see that it’s already greatly affecting the languages, cultures, art, and way of life here. While the change might not come from an invading suppressor, the ultimate effect might be much the same.

Ethiopia and the other non-colonies have some unique qualities that hint at how diverse the human condition really is, cultural gems that we should cherish, since they might not be so obvious in the future. 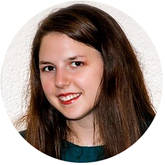 Courtney Danyel is a freelance writer currently based in southern Ethiopia. She has an MA in evolutionary anthropology and a passion for people, cultures and travel. Learn more about her at CourtneyDanyel.comand follow her on Twitter TWTR -1.51% @danyeltravels.

Source: The Wall Street Journal and all the credits goes to Courtney Danyel