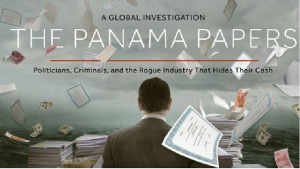 A massive leak of documents exposes the offshore holdings of 12 current and former world leaders and reveals how associates of Russian President Vladimir Putin secretly shuffled as much as $2 billion through banks and shadow companies.

The leak also provides details of the hidden financial dealings of 128 more politicians and public officials around the world.

The cache of 11.5 million records shows how a global industry of law firms and big banks sells financial secrecy to politicians, fraudsters and drug traffickers as well as billionaires, celebrities and sports stars.

These are among the findings of a yearlong investigation by the International Consortium of Investigative Journalists, German newspaper Süddeutsche Zeitung and more than 100 other news organizations.

The files expose offshore companies controlled by the prime ministers of Iceland and Pakistan, the king of Saudi Arabia and the children of the president of Azerbaijan.

They also include at least 33 people and companies blacklisted by the U.S. government because of evidence that they’d been involved in wrongdoing, such as doing business with Mexican drug lords, terrorist organizations like Hezbollah or rogue nations like North Korea and Iran.

One of the prominent Israeli businessmen appearing in the leaked documents is Jacob Engel. He is primarily active in African mining through the Elenilto and Engelinvest Groups. Last year TheMarker reported that Elenilto won the government of Togo’s international tender for constructing and developing a phosphate mine and fertilizer factory that would cost $1.4 billion. Elenilto won a huge tender in 2010 for an iron ore mine in Liberia, but sold the concession after a year and a-half to India’s Sesa Goa company for $90 million.

The Engelinvest Group registered five companies through Mossack Fonseca. Engel, or companies he owns, directly controls some of them. However, the connection is more blurred with some of the companies. For example, in 2012 Engelinvest registered a company called TDNN in Anguilla, whose only owner and director was Col. (res.) Olivier Rapowitz. The company’s declared goal was mining activity in the Democratic Republic of Congo. Rapowitz, who in recent years served as an emissary of the Jewish National Fund in Belgium, refused to respond to a Haaretz inquiry on the matter.

Another company registered by Engelinvest in Anguilla is Irisgianman. Besides the registration itself, it is hard to identify the connection between the subsidiary and the parent company. The goal of the new company, which was established in October 2011, is mining activity in Ethiopia. Its shareholders, according to the registration documents, are two Israelis, one named Iris Levenstein and the other identified as Y., and Valona Giancarlo, an Italian national residing in Addis Ababa.