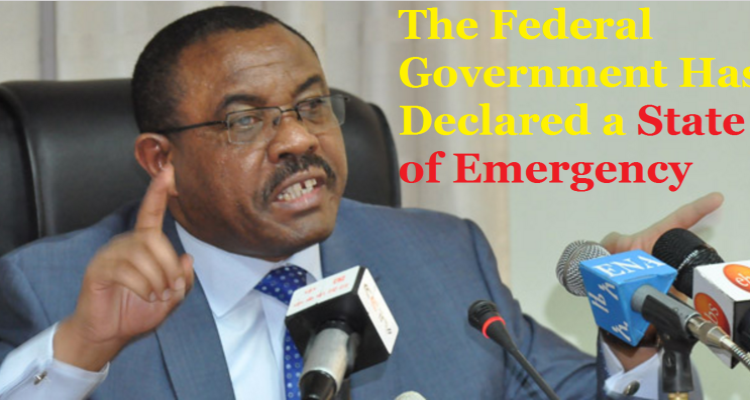 BREAKING NEWS: The Federal Government Has Declared a State of Emergency

The federal government has declared a state of emergency as of Saturday, October 9, 2016.

The cabinet of Prime Minister Hailemariam Desalegn has an emergency meeting on Saturday afternoon where the government declared the state of emergency at a time of deteriorating security situation in Oromia Regional State.

The state of emergency declared for the first time in 25 years, will last for six months.”It may be shortened depending on the improvement on the security front,” a senior government official told Fortune.

Definition of State of Emergency from Wikipedia
A government or division of government (i.e. on a municipal, provincial/state level) may declare that their area is in a state of emergency. This means that the government can suspend and/or change some functions of the executive, the legislative and/or the judiciary during this period of time. It alerts citizens to change their normal behavior and orders government agencies to implement emergency plans. A government can declare a state of emergency during a time of natural or human-made disaster, during a period of civil unrest, or following a declaration of war or situation of international/internal armed conflict. Justitium is its equivalent in Roman law, where Senate could put forward senatus consultum ultimum.
It can also be used as a rationale (or pretext) for suspending rights and freedoms guaranteed under a country’s constitution or basic law. The procedure for and legality of doing so varies by country.

Relationship with international law
Under international law, rights and freedoms may be suspended during a state of emergency; for example, a government can detain persons and hold them without trial. All rights that can be derogated from are listed in the International Covenant for Civil and Political Rights. Non-derogable rights cannot be suspended.

The state of emergency can, and often has been, abused by being invoked. An example would be to allow a state to suppress internal opposition without having to respect human rights. An example was the August 1991 attempted coup in the Soviet Union (USSR) where the coup leaders invoked a state of emergency; the failure of the coup led to the dissolution of the Soviet Union.
Derogations by states having ratified or acceded to binding international agreements such as the ICCPR, the American and European Conventions on Human Rights and the International Labour Conventions are monitored by independent expert committees, regional Courts and other State Parties.[8]